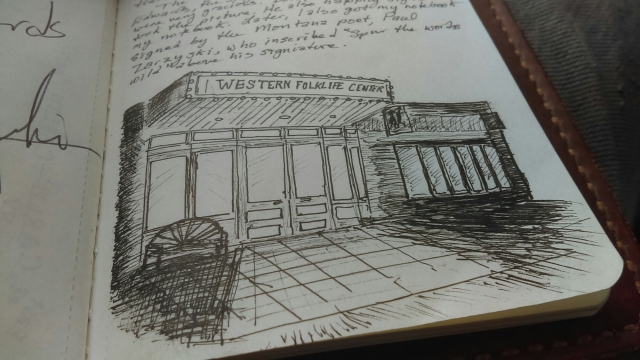 It has been a while since I’ve jumped in the blogging saddle, so here is a sketch of the Western Folklife Center in Elko, Nevada—home to the National Cowboy Poetry Gathering. If you’re a fan of folk music and you’re unfamiliar with Elko, the Gathering, or with the concept of cowboy poetry, do yourself a favor and look into it. Going on thirty-three years, the multi-venue event runs from the last weekend of January through the first week of February. On the last night of the Gathering this year, my wife, kids, and I met Don Edwards, a cowboy singer from Texas, during a meet and greet held at the Elko Convention Center. We also met Montana-based poet, Paul Zarzyski, who inscribed “Spur the Words Wild!” beneath his autograph in my Moleskine notebook. 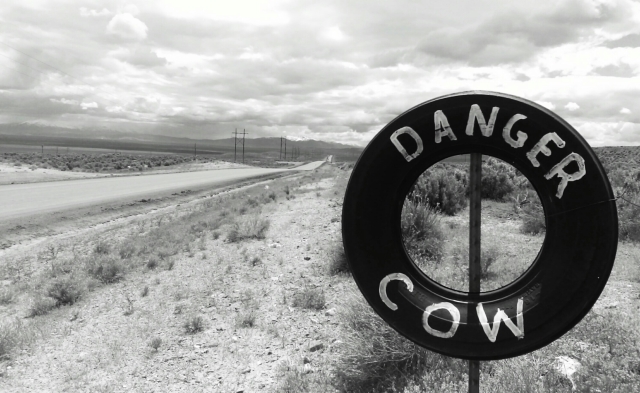 Use whatever you have, wherever you are, whenever you need it— within reason. As an aside, Nevada ranchers have been upcycling before Pinterest was a thing.

LONE BUTTE, Humboldt County, Nevada—Located between the southern end of the Osgood Mountains and the northern end of the Edna Mountains, Lone Butte overlooks Red House Flat and the sea of sagebrush and bunch grass which grows there. It was undoubtedly a familiar geographic landmark for weary travelers on the California Trail, being north of one of the Humboldt River crossings along that old historic byway. As of March 2016, the landscape lies cold with hints of spring found in grass up-shoots here and there.

We hit the dusty trail again yesterday afternoon, following the infamous Hastings Cutoff backwards. Not far from the canyon overlook we explored last week, we traveled west of the small one-bar town of Jiggs in Huntington Valley, where we hoped to find some wagon rut remains where the trail cuts across Huntington Creek.

My kids sat in their seats and boosters, anxiously peering out the car windows, expecting to see real canvas covered wagons led by oxen. My wife explained that we were looking for the wagon trail, but there would be no actual wagons amongst the sage and sun-cracked soil. Nevertheless, they continued gazing out in the distance—hopeful. Even if there weren’t any emigrants atop buckboards holding leather reins to teams of oxen, horses or mules, a certain special quality came over us as we geeked-out chasing this old trail.

After turning around once or twice, stopping to snap pictures a couple times, we referred back to three different maps, including our Benchmark road atlas, a fold-out topographical map and a topo app on my Android. We knew were on the right track, so to speak, as we came to an obscure historical marker. The wind was picking up and small dust devils swirled out on the horizon. A rough, washed out dirt road branched off  our path, catching our attention. It ran  diagonal to the marker, and according to our maps, Hastings Cutoff ran in both directions. We turned down the washed out road and parked out car, letting the oldest two kids out to explore.

It was here, we believe, we found old wagon ruts. History geeks unite! 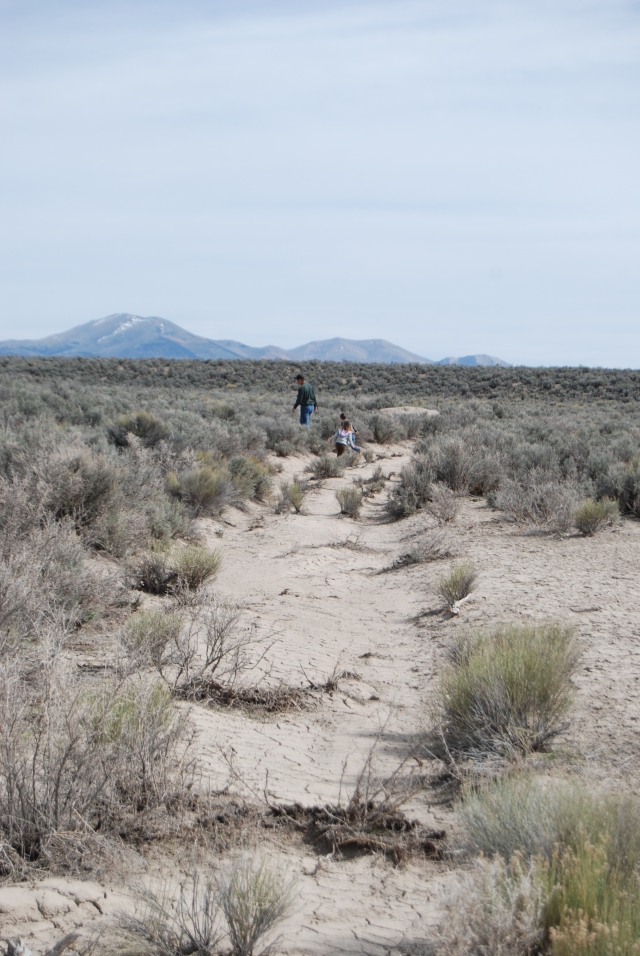 From there we headed over the Rubies on Overland Pass, joining a part of the Pony Express Trail. Two historically significant trails in American history in one afternoon!

We took many more photos and read many more markers as the day wore on into evening. Once over the summit, we descended into Ruby Valley, turned left, heading north to Secret Pass, which is lies between two ranges—the Ruby Mountains and the East Humboldt range. We looped back to Elko via the interstate and made it home before dark. We drove over two hundred miles within an afternoon, something that would have taken wagon trains ten to fourteen days to do without problems. We bid the trail and phantom covered wagons adieu with fast food awaiting us in town.